After the crowds in the Gulf Islands over Labor Day, we crossed Boundary Passage back into the USA.  We’re thankful that we have Nexus cards which allow us to clear back in via phone without reporting for an in-person inspection at one of the very busy stations in Roche or Friday Harbors.  Instead we declared Prevost Harbor on Stuart Island as our first port of call, thereby saving at least 3 hours.

After one night at anchor in Prevost, we continued on to Deer Harbor where our yacht club (Queen City) leases about 120 feet of dock space.  We were fortunate that space was available at the dock when we arrived.  Two other boats arrived later that day and had to raft to those of us tied to the dock. 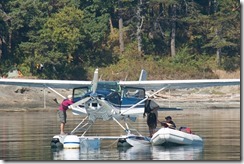 After relaxing for four days at the dock, we headed to Echo Bay on Sucia Island.  We arranged for our friends, Natala and Don Goodman, to fly in with their float plane.  They live on Lake Sammish, south of Bellingham, and moor their plane there during the summer.  For them it is a short flight to Echo Bay.  After they landed, I helped them tie up to one of the many Washington State Parks buoys in the bay and ferried them over to our boat. 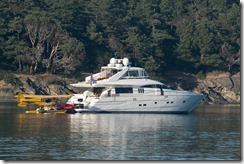 Later that day, we saw another float plane land in the bay but instead of going to a buoy, it nestled up to the stern of a large yacht. It turned out, that Don knew its owners, a couple who lived in Anacortes. The next day, after Don & Natala departed, the people in the yacht flew off in their airplane and 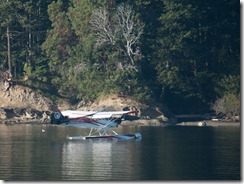 returned with an additional float plane (they are both pilots).  They moored the second airplane at a buoy as Don had. 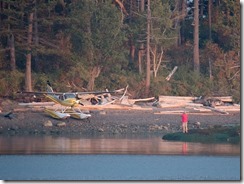 Later that afternoon, a third float plane came in and landed in Echo Bay.  This one taxied up to shore where its pilot tethered it to shore and set up is camp in the trees nearby.  He came in near high tide so his plane was soon high & dry.

In a period of less than 24 hours, Echo Bay had four separate floatplanes joining the dozen or so power and sail boats enjoying the splendid late summer weather in Echo Bay.

Email ThisBlogThis!Share to TwitterShare to FacebookShare to Pinterest
Labels: Cruise 2017