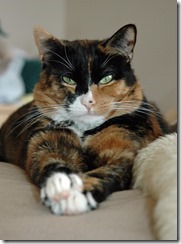 At the end of the 2018 cruising season we could see that it was Maggie’s last voyage.  The chronic kidney failure that claimed her sister, Annie, two years earlier was taking its toll on Maggie.  She ate specialized prescription cat food and was medicated with an appetite stimulant, anti-nausea and Calcitriol, but her weight loss continued.

In recent weeks the weight loss increased.  She had lost over 20% of her weight since we arrived in early November.  She became not much more than fur, skin and bones.  Her gait was wobbly and her jumps to laps or chairs uncertain.  Rather than have her suffer any further, we decided today would be her final visit to the veterinary office. Both Maggie and and Annie joined us in 2002, adopted through Purrfect Pals.  Maggie (short Magellan) was always more adventurous than her sister.  She was the kitty who would sneak into any “forbidden” room or area if the opportunity presented.  More than once, we’d search through the house calling her name, getting no response, only to find her tucked quietly in a closed drawer or cabinet than had been opened briefly.

Being an indoor cat, the out of doors, were a particular attraction.  Fortunately, she did not have a strong hunting instinct.  The few times we took her outside, she was content to find a bit of greenery she could munch on.  We grew many containers of cat grass which she thoroughly enjoyed (often to excess based on the number grassy “urps” we’d find afterwards). 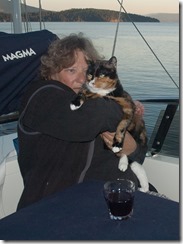 She was first introduced to boating in 2006 on our first boat.  Since then, she has traveled with us on virtually every boating trip longer than a few days.  While initially fearful of the loud noise of the “monster” in the engine room, later that sound would signal her to head to the pilot house anticipating the lap that would appear for her at the helm chair.

Even on our drives to/from Arizona, she became a good traveler.  While she had a large enclosed “den” in the van, most of the time she rode shotgun style, curled up on the front-seat center console.  She was comfortable enough with car travel to use the litter box while we drove.  Even the motel rooms became an opportunity to find a new hiding spot.

The 2019 cruise will be a quieter and lonelier voyage without our ship’s cats. 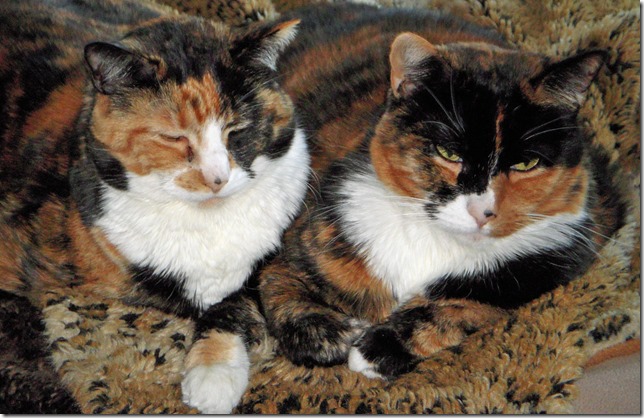 Email ThisBlogThis!Share to TwitterShare to FacebookShare to Pinterest
Labels: About Us